This is a fan-run collaborative wiki dedicated to being an exhaustive reference to the animated series Gargoyles as produced by Disney as well as the official comics and additional material.


Warning: This wiki will contain spoilers!

Gargoyles was an acclaimed animated series that originally aired from October 24, 1994 to February 15, 1997 in the United States. It was at the time hailed as one of the more ambitious Disney animated series in history, targeting an older demographic and taking a darker edge. The show was also notable for its complex story, and character arcs that were heavily employed throughout the series.

The series followed a clan of warrior creatures known as gargoyles that turn to stone during the day. Led by their leader Goliath in the year 994 A.D., they protected Castle Wyvern and its resident humans on the coast of Scotland until betrayal caused a massacre of the clan and a magic spell forces the six survivors into stone sleep, until the castle rises above the clouds. In 1994, a billionaire named David Xanatos purchases the castle and moves it to the top of his Manhattan skyscraper, breaking the spell. Awakening in modern day Manhattan, the gargoyles must adapt to this new world as they vow to protect the citizens of New York.

The Gargoyles storyline was continued in a comic book also titled Gargoyles written by Greg Weisman and produced by Slave Labor Graphics . The comic has since been discontinued, but the loyal fanbase has kept the property alive in the decades following its cancellation, resulting in the entire first and second season becoming available on DVD. 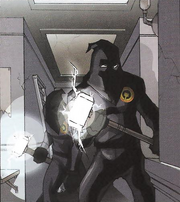 The Quarrymen is a movement founded by John Castaway in 1996 that advocates the destruction of the gargoyle race. Preying upon the fears of a public still reeling from the revelation that gargoyles existed in Manhattan, Castaway lured a number of New York citizens into his organization under the pretense of protection against the "monsters". Under his leadership, the Quarrymen now search New York for gargoyles, hoping to destroy or at least contain them. (more...)

To write a new Grimorum article, enter the page title in the box below.

Please note that there are two perspectives that articles should be written from:

"I guess the corrupt are the first to believe that somebody else can be corrupted. And it's not impossible, none of us are perfect; that's why we need protection, even from ourselves sometimes."
— Elisa, Protection

Community content is available under CC-BY-SA unless otherwise noted.
Advertisement