Second in Command of the Manhattan Clan

Brooklyn is a gargoyle, a founding member of the Manhattan Clan, and was once a part of the destroyed Wyvern Clan. He makes up the Trio with his rookery brothers, Lexington and Broadway.

Brooklyn debuted in Awakening as a young male gargoyle with a slimmer physique than his rookery brothers, red skin, black eyes, a long beak-like mouth and jaw, and a wild mane of snow-white hair. He also has two horns sticking out of his forehead. He often appears slouching and kneeling probably because of his small talons. He also wears a dark blue tunic-like wrap around his lower half.

After forty years traveling through time, Brooklyn has grown older, his legs are now longer and thicker, closer in proportion to Goliath's, allowing him to stand more upright. He now wears armor and an eyepatch over his left eye. He also carries a futuristic rifle, a blaster, a katana, and a Scottish broadsword.

In Future Tense, Brooklyn has grown older with a much larger and muscular build and wears battle armor around his upper build, wrists, and ankles.

Though not stated out right in the series, Brooklyn hatched in 958, and was approximately thirty-six at the time of the Wyvern Massacre, which is the gargoyle biological equivalent to eighteen. After the curse is broken in 1994, Brooklyn, like the rest of his clan, gained a further thousand years (for the purpose of simplicity these will not be counted as part of his age). Three years later at the age of thirty-nine (about nineteen), Brooklyn came into contact with the Phoenix Gate, and spends the next forty years, from his perspective, traveling through time before returning forty seconds later, from the perspective of the witnesses, now at age seventy-nine, the gargoyle biological equivalent to about thirty-nine, making him 10 years biologically older than Goliath.

Brooklyn first appears in "Awakening" as a young red gargoyle. While playing with a gargoyle beast with one of his rookery brothers, a young peasant boy named Tom approached Brooklyn. The boy and the gargoyle chatted amiably until the boy's mother, Mary, threw a stick at Brooklyn, calling him a beast. Brooklyn lost his temper, and he, his brother, and the gargoyle beast pretended to attack the peasants. Goliath and his mate broke up the conflict. Goliath sent the guilty gargoyles, one of their brothers, and the gargoyle beast to the rookery as punishment which saved them from the attack on the castle led by Hakon. The next night, along with the surviving members of the Wyvern Clan, he participated in an attack on Hakon and his men. The Magus, thinking Princess Katharine was dead because of the gargoyles' attack, decided to cast the spell which held them all in a stone sleep for a thousand years.

In 1994, Xanatos broke the spell holding the survivors in stone sleep. The newly formed clan was reunited with Goliath's mate, and were tricked by Xanatos into committing crimes on his behalf. Goliath's mate revealed she was in league with Xanatos, and attacked the Manhattan Clan. Shortly after Demona deceived her clan, she tricked Brooklyn into being disloyal to Goliath, turning him into a mindless slave. Brooklyn was forced to stop her and he eventually helped to break the spell that controlled Goliath's mind. Now he has a very deep feeling of resentment for Demona and he will attack her if he comes across her.

In the episode Metamorphosis, Brooklyn chased after a shadowy figure in an alleyway that he thought was Demona, but this had proven to be false. It was actually a mutate known as Maggie Reed, a human who was turned into a cat. Brooklyn soon found himself in a position to rescue her, but he gets shot with a tranquilizer dart. Broadway saves him, but Brooklyn wants to help the human/feline hybrid. He soon takes a liking to her. Maggie warmed up to Brooklyn in Kingdom, but the two never formed a relationship that would last forever.

Brooklyn has proven himself to be an incredibly skilled leader worthy of leading the Trio. When Goliath, Bronx and Eliza were absent, Brooklyn quickly took charge of the Trio, utilizing all of the skills he knew that Goliath would be proud of. When Goliath came back after the extended absence with his daughter Angela, he became enveloped in a rivalry with Broadway and Lexington for her love. Sadly for Brooklyn, Angela chose Broadway for her mate. But, she's still flirting with him. Since Broadway has Angela and Maggie has Talon, Brooklyn turns his attention toward Delilah of the Labyrinth Clan, but her attentions were diverted by Goliath who took her on a date at Eliza's request. After helping fight off Thailog with his clan, Brooklyn noticed that Delilah displays no interest in him, and continues to live his life without a romantic partner.

In Greg Weisman's proposed TimeDancer saga, Brooklyn comes into possession of the Phoenix Gate after Goliath had thrown it into the timestream, whereupon he would be thrust into a forty-year journey during which he would acquire a new gargoyle beast named Fu-Dog and a female gargoyle named Katana who would become his mate and mother of his children, Nashville and Tachi. After forty years, Brooklyn has grown older, his legs are now longer and thicker, closer in proportion to Goliath's, allowing him to stand more upright. He now wears armor and eyepatch over his left eye. He also carries a futuristic rifle, a blaster, a katana, and a Scottish broadsword.

Though many of the characters undergo some form of character growth over the course of the show, perhaps none did more so than Brooklyn. As the series went on, Brooklyn evolved from a brash, impulsive, hot-headed youth into a calm, tempered and level-headed leader. While most of his clan mates became fixated on some new modern concepts, Brooklyn never did, aside from a brief early interest in motorcycles. Instead, his interests were mostly focused on his duties, to his clan and to the city, and romance. The only other to do this was Goliath, which may be why he was able to develop into a capable leader.

In the modern day, Brooklyn displays an occasionally reckless and occasionally sardonic attitude, but is also a capable tactician and leader, as evidenced by his promotion to Goliath's second in the second season episode, Upgrade. He took his name from the New York City borough of Brooklyn.

Brooklyn likes exploring, and finding out more about human ways. In his adolescence, he even wore sunglasses because they were "cool." (and never mind the fact that sunglasses at night are pointless) He is a quick-witted gargoyle, and has a certain fondness for making wisecracks and sarcastic quips at times. But underneath his thrill-seeking and comic exterior, Brooklyn has a lonelier, almost "gothic melancholic" side.

Brooklyn's best asset is his keen calculating nature; for instance, he is a master tactician capable of orchestrating assaults that often leave the most formidable foes reeling.

Brooklyn later harboured a deep disgust for Demona and her willingness to harm her former clan in her quest to destroy humanity, which he rightfully views as insane and hypocritical. This started when Demona tricked him in Temptation into betraying Goliath and allowing Demona to gain control of the lead Gargoyle via a spell. As such, he is prone to attack her on sight, much to the impatience of the clan who value his calculating nature.

During an extended absence by Goliath, Elisa Maza, and Bronx, Brooklyn took control of the clan and led them with all the masterful skill Goliath knew he had.

Brooklyn is known for having bad luck with romances. His first apparent crush, on a human-turned-mutate named Maggie Reed, ended badly, with her blaming him for her condition and saying he was a monster who wanted to keep her a monster. Though they later became friends, she entered into a relationship with Talon, another mutate. Brooklyn also pursued Goliath's daughter Angela as a mate, and was heartbroken when she chose Broadway instead.

This streak of romantic misfortune continued with a particularly frustrating turn when the female clone hybrid, Delilah, passed him over for his own clone, Malibu.

Shortly after, Brooklyn was whisked away in time by the Phoenix Gate (which transforms into a Phoenix) to 997 AD. He aided Mary and Finella (last seen trying to keep the Grimorum away from Constantine) he persuaded Demona and her clan to help Kenneth III defeat Constantine. After the battle was won, the Phoenix appeared to whisk Brooklyn away to another era (though not shown, he brings Mary and Finella along with him) after 40 years of traveling through the time stream, Brooklyn returned to his original time 40 seconds later with his family. 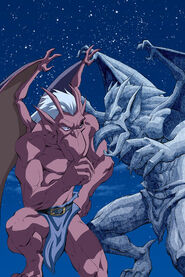 Brooklyn meets his petrified self in 997 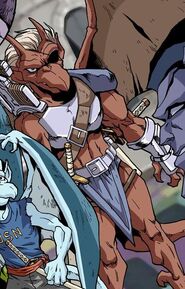 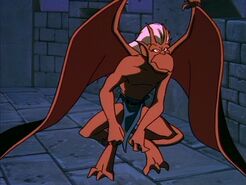 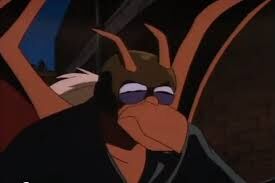 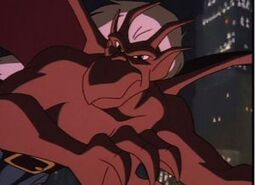 Add a photo to this gallery

Retrieved from "https://gargoyles.fandom.com/wiki/Brooklyn?oldid=13307"
Community content is available under CC-BY-SA unless otherwise noted.